The polar bear is the largest species of bear and is among the largest carnivores found on land. The largest live captured bear from Ontario was a male weighing 654 kg (1440 lbs). Females are lighter and smaller, usually weighing less than 300 kg (660 lbs). 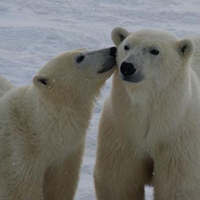 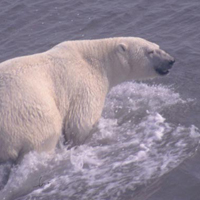 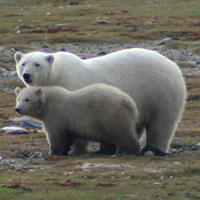 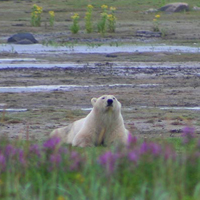 The polar bear has translucent hair that appears white, allowing it to blend in with its snowy surroundings. It has water-repellent fur and large forepaws that make efficient paddles, making the Polar Bear a strong swimmer.

The Ontario population of polar bears can be found on the sea ice of Hudson Bay and James Bay from late fall until early summer. During the winter, polar bears roam widely over the sea ice and hunt Ringed and Bearded Seals. When ice in Hudson Bay and James Bay melts, the bears are forced onto land for several months. During this time, they are dependent on fat reserves they stored over the winter. During fall, pregnant females dig maternity dens in the sides of palsas (raised peat mounds), gravel ridges and river banks.

Climate change is responsible for higher air temperatures in the north, causing the spring ice break-up to occur earlier and freeze-up to occur later. The extended ice-free season has a direct impact on the polar bear’s ability to hunt.